"They still have their wild instinct" - Minka Kelly 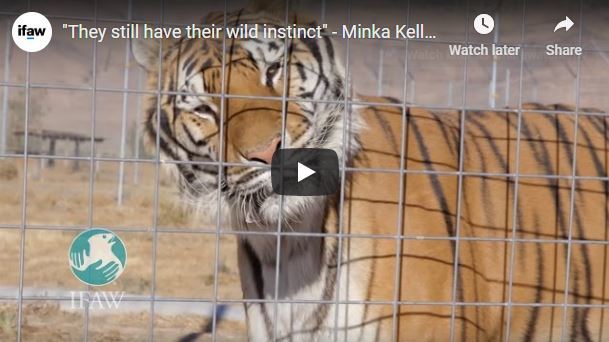 Editor’s Note: In light of the recent incident where an animal trainer was attacked by a tiger at a Florida fair, IFAW ambassador and actress Minka Kelly wanted to share her experience visiting the Safe Haven Wildlife Sanctuary and what she learned about the growing problem of big cats in captivity.

Want to take a selfie with a baby tiger cub?

Up until a while ago, my answer probably would have been “of course!”

I recently had the opportunity to spend a weekend with my friends at IFAW at Safe Haven Wildlife Sanctuary in Imlay, Nevada. Learning the difference between legit sanctuaries and pseudo-sanctuaries was infuriating, heartbreaking, and profoundly eye-opening.

Infant tiger cubs seem small and harmless, and are undeniably cute. Cub photo-ops, both in the US and abroad, have become so popular that “tiger selfies” are ubiquitous on social media. Unfortunately, much of the public is unaware of the cruelty behind these selfies. I too was guilty of seeing these fun videos and photos of people on Instagram cuddling with and bottle feeding these adorable baby tiger cubs and thinking “How sweet!”

Well-meaning visitors are told that roadside zoos and cub handling displays are intended to teach them about wildlife conservation and that the lion and tiger cubs enjoy the interactions. What the cub breeders and exhibitors—many of whom call their operations “sanctuaries” or “rescues,” but in fact operate exploitative pseudo-sanctuaries—don’t tell the public is that these infant animals are prematurely torn from their mothers, denied the opportunity to develop their immune systems, underfed to ensure that bottle-feeding photo-ops are always available to paying customers, treated harshly or beaten to discourage natural behaviors, and regarded as disposable as soon as they grow too large to be profitable for interactive displays. They mislead visitors about the animals’ conservation value—despite their claims, captive big cats bred here in the US will never be released into the wild—and spread misinformation about big cats’ behaviors and needs.

Direct contact displays involving infant animals also drive incessant breeding and, once cubs grow larger and lose much of their commercial value, they may enter the exotic pet trade, become displays at other unqualified roadside zoos, be warehoused or otherwise disposed of. And with no comprehensive system of tracking captive tigers, there is no way to know where these cubs end up for the remainder of their lives.

There’s also the added factor that this is dangerous. We recently saw a Bengal tiger scratching and dragging its trainer in Florida, while being paraded around for children during a state fair. What might seem playful to a tiger might prove to be fatal to humans.

However you look at it, tigers in captivity is inhumane, heartbreaking and hazardous.

I met Carli and Lily—two adult tigers—at Safe Haven Wildlife Sanctuary and watched them frolic in their pool, play with pumpkins (big cats love them!), enjoy an afternoon snack, and relax in the shade in their sprawling enclosure. As I watched these playful girls splash around in the pool, carefree and happy, it was hard to believe that they had such a devastating history.

Carli, Lily and their siblings were likely bred from a mother-son pair (yes, you read that correctly), a devastatingly common breeding practice in private ownership situations. They spent the first part of their lives at a roadside zoo in New York, where they—along with 19 other big cats and exotic animals—were denied proper nutrition and veterinary care and were kept in substandard enclosures. When the International Fund for Animal Welfare (IFAW) arrived to rescue them in 2014, every animal on the property was malnourished. The only “food” identified in the tigers’ enclosure was a dead housecat.

This is a common theme among the animals at Safe Haven. I met a lion whose original home at a roadside zoo in Iowa had “the most deplorable conditions of abuse and neglect” she had ever seen. Clarence, a white tiger who is cross-eyed and nearly blind due to inbreeding—as all white tigers are—had been locked in a tiny cage inside a barn for years, denied even basic care, stimulation and opportunities to engage in natural behavior.

One would think it would be illegal to keep these animals as pets and roadside displays, to neglect and abuse them. I was stunned to learn that big cats are kept in terrible conditions across the country to this day. In fact, there are more tigers in private hands in the US than remain in the wild worldwide, and the number of captive cats continues to rise. Shockingly, this isn’t driven by black market trade or other illicit activity; private possession is legal in many places and, even where regulated, is governed by a patchwork of inconsistent, loophole-ridden state laws.

We need better laws—like the federal Big Cat Public Safety Act—to protect these animals from irresponsible “pet” owners and from opportunists who charge unknowing consumers to play with, take photos of, and otherwise interact with big cats.

So what can we do to change the future for big cats in the US?

Thankfully, each of us has the power to affect positive change for these incredible animals. Call upon our members of Congress to support the Big Cat Public Safety Act, a federal bill that would bring an end to irresponsible private ownership of big cats. Take a stand against the exploitation of these animals through our own choices-avoid all displays that allow direct contact with big cats, resist the temptation to take selfies with lions and tigers, and use your voice to inform others. Visit and support true sanctuaries—ones that do not breed, allow direct contact with, buy or sell, or otherwise exploit big cats-and avoid pseudo-sanctuaries. Do your homework before you visit a facility that houses captive big cats; if you are visiting a zoo, ensure that it is accredited by the Association of Zoos and Aquariums (AZA), and if you decide to patronize a sanctuary, be sure to confirm that it provides lifetime care to rescued animals and does not engage in any breeding, sales or direct contact.

Fortunately, at least some captive big cats see happy endings. Carli, Lily and the other beautiful cats at Safe Haven—a true sanctuary where animals are given lifetime care and are free from exploitation—now live in a caring, quality environment. But there are thousands of big cats just like them living in deplorable conditions across the US.

Please think about this the next time you see a selfie with a tiger cub or go to snap one yourself.

best of big cats: ifaw rescues and protects big cats across the world

watching Tiger King? here’s what you should know (and how you can help)