I spend a lot of time on the ocean. It’s where I make my living and where my passion lies. As a professional kite surfer, I’ve had the privilege of surfing the most incredible waves and experiencing this fragile ecosystem firsthand. Whales are the most magnificent marine mammals; seeing one in its natural, wild habitat changed the way I look at the world.

Whales and other marine mammals across the world die as a direct result of human behavior. The International Fund for Animal Welfare is working to protect these ocean animals, which is why I became a Marine Ambassador for IFAW in early 2019.

In Iceland, the inherently cruel practice of commercial and so called scientific whaling has led to the slaughter of 1,505 whales since this cruel hunt resumed in 2003. IFAW has relentlessly campaigned to stop the hunt. I’m thrilled to report that for the 2nd year in a row, not a single whale died from the commercial hunt in Iceland. I credit IFAW’s unique approach to drive sustainable solutions with this victory.

from whaling to whale watching

Instead of “going to war” with the whalers, using “name and shame” tactics, IFAW put the focus on marine conservation and promoted activities that would protect whales. Back in 1990, IFAW worked hard behind-the-scenes to create a positive alternative to the cruelty of commercial whaling: whale watching.

Over 30,000 Icelandic and foreign tourists went whale watching in 1998 and that number increased 10-fold by 2017 with over 368,000 people whale watching - more than Iceland’s entire population. This shift to a sustainable activity stimulated the economy and provided an educational and entertaining alternative for the country.

I have seen whales many times and have been whale watching myself. Each time is an unforgettable experience that fuels my fascination and love for these mammals. Whale watching has the power to convert tourists and locals into marine ambassadors like me. 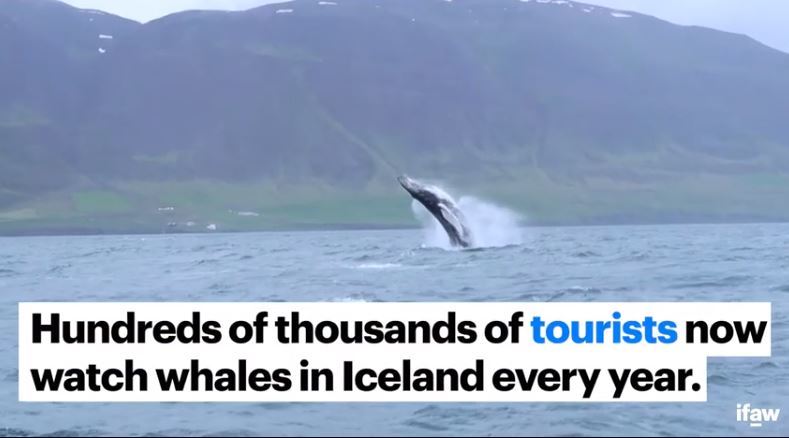 meet us don’t eat us

IFAW partnered with IceWhale, the Icelandic Whale Watching Association, to launch the “Meet Us Don’t Eat Us” campaign in 2011, which aimed to convince tourists to not eat whale meat in restaurants. Between 2009 and 2017, the number of tourists who said they tried whale meat dropped by 70%. Now, more than half of the restaurants in Reykjavik signed up to be “whale friendly”, and less than 10% offer whale meat.

Today, only one company hunting fin whales remains active in Iceland, though their last catch was in 2018. With a decreasing demand, the rise of whale watching and export difficulties with Japan, whaling will hardly be sustainable, and will likely end soon.

I hope the other two remaining whaling nations in the world – Norway and Japan – will follow Iceland’s lead and set a positive example of ending practices that harm marine mammals and thus our oceans. There is no better time to do the right thing than right now.

Changing behaviour and culture takes time and can only be successful when listening to the local voices and with local ownership and engagement. IFAW’s campaign succeeds because it is led in partnership with the Icelandic people. I am proud to campaign beside IFAW as a Marine Ambassador and invite you to join us as we work toward a world where animals and people thrive.

five of the big threats to life in our oceans